I’ve got a special place in my heart for the Yorkshire Air Museum.

I visited a lot of aircraft museums this summer (well… four!) and they’ve all got amazing exhibits and displays to talk about, but the Yorkshire Air Museum made me the happiest. There’s something special about it.

I admit I could have been unduly swayed by the weather. My visit was on a warm sunny mid-september day, so, as a former WW2 airfield with an authentic control tower (often used for TV & films) surrounded by WW2 era nissan huts and aircraft, it looked and felt just as any RAF airfield might have done exactly 76 years ago on Battle of Britain day (15 Sep 1940)… only perhaps less busy 😉

And it sounded like it too. They have a pair of Tannoy loudspeakers on the control tower, playing period music such as Glen Miller, Andrews Sisters, Vera Lynn, Lale Andersen (‘Lili Marleen’) and Edith Piaf . It’s amazingly evocative, as you can hear…

The Yorkshire Air Museum is UK’s largest independent air museum and home to the Allied Air Forces Memorial. It was formerly RAF Elvington, a grass airfield that was upgraded with three hardened runways in 1941 ready, in October 1942, for its first operational aircraft – 20 Handley Page Halifax four-engined heavy bombers belonging to 77 Squadron RAF.

77 Squadron were badly mauled in WW2, losing almost 1,100 aircrew killed, MIA or captured. They lost 82 Halifaxes in the 18 months they were based at Elvington, in the Battle of the Ruhr and the Berlin bombing campaign.

They were moved to nearby Long Sutton in May 1944 to make way for the 2,500 personnel of 346 “Guyenne” and 347 “Tunisie” squadrons of the Free French Air Force (FFAF) – the only two French heavy bomber squadrons. They fought in many of the key air campaigns of the war including the Invasion of Europe, the destruction of the V1 & V2 sites, and the Ruhr Valley campaign. At the end of the war, they returned to Bordeaux to become the foundation for the French Air Force bomber.

After WW2, the base was used by the RAF for maintenance. Then in 1952 Elvington became part of the US Strategic Air Command expansion. The main runway was extended for heavy jet bombers to 1.92 miles (10,152 ft) – the longest in northern England. However it never became operational.

In the 1960s, the Blackburn Aircraft Company used the runway for testing the prototype of the Buccaneer, and the RAF used it as a relief airfield until it was closed in 1992. 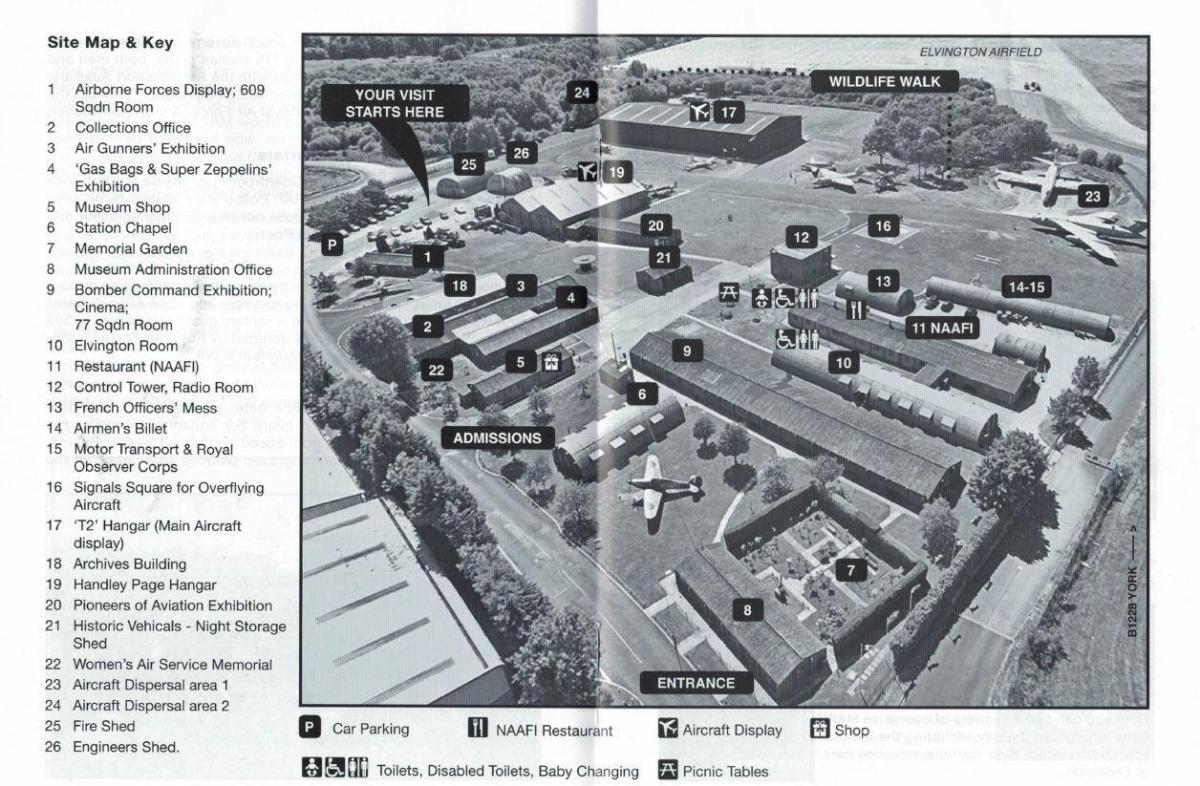 Well, it’s quite an eclectic collection of aircraft (45) and aviation artifacts, memorabilia & archives (250,000 important paper, film & photographic records plus 6000 specialist books in the collections hut), from the earliest days of flight to the end of the Cold War. The focus is on military aviation… but not exclusively, and history related to the RAF Elvington site… but not exclusively.

For example, Building No. 1, the first I went into, with its Spitfire Mk1 replica parked outside, is the memorial/archive room for 609 Squadron of the Royal Auxiliary Air Force… who were never based at Elvington.

The static aircraft collection is based inside their main hanger and outside on the tarmac.

The centrepiece of the T2 hanger is the giant (reconstructed) Handley Page Halifax, ‘Friday the 13th’.  These bombers flew from Elvington with all three English & French resident squadrons. The museum has some 360° images from inside the Halifax.


Other WW2 aircraft in the hanger include a Messerschmitt bf 109G-6 (replica), a beautiful De Havilland Mosquito NFII, a Waco Hadrian glider, and a Douglas Dakota IV, that you can climb into.

There are a couple of noteworthy WW1 replicas in the hanger too – an Avro 504K trainer and a Royal Aircraft Factory SE 5A, and some post WW2 aircraft such as the De Havilland Vampire, a Hawker Hunter T7, and a Hunting-Percival Jet Provost T4.

There were also some surprises; aircraft that I hadn’t really paid much attention to, until I ran into one of the museum guides, Steve Hill, who reminded me that it’s “not just about the aircraft as objects, but the stories behind them”, starting with the replica of the Wright Flyer (Wilbur & Orville’s masterwork, that got the ball rolling) and “Father of Aeronautics” Sir George Cayley’s Governable Parachute …

And then there’s The Flea! So dangerous I’m not even sure it deserves to be called “an aircraft”

Out on the tarmac

It’s a shame when aircraft have to be stored outside. Exposed to the elements they tend to degrade pretty quickly. The Yorkshire Air Museum only has a handful of aircraft outside (not like the Luftwaffe Museum in Gatow, Berlin which has so many aircraft (150+), 70 of them plus 60 pieces of military equipment such as missile vehicles, have to live outside!) and you can see the deterioration on some of them, particularly the large BAe Nimrod MR2 and the Handley-Page Victor K2, which can’t be rotated inside for some TLC.

There is another Buccaneer out here, which needs some love and attention (I’m contributing to her upkeep *). It’s a pity; this particular S2 model was the very first Royal Navy aircraft to cross the Atlantic without refueling and now she stands out in the rain looking a little forlorn.

Thankfully the other aircraft outside – a Panavia Tornado GR4, a beautifully slim & elegant Dassault Mirage III, and one of my favourites, a Fairey Gannet AEW 3 – are all looking in pretty good condition. (Wouldn’t it be useful if we had a modern aircraft carrier capable of flying an Airborne Early Warning platform like the Gannet?!)

This Buccaneer S2 could use some TLC

Most of the other buildings on the site are long concrete buildings and nissen huts housing themed exhibitions and other artifacts, but there is one other small hanger…

The Handley Page Hanger is where their restoration work takes place, so there are usually a couple of aircraft in here at any one time ( a WW1 Royal Aircraft Factory BE2 biplane and a WW2 Avro Anson when I visited). It’s also where they house their bomb & missile exhibits… including, for me the standout artifact, a 12,000 lb Tallboy bomb – all 21ft (6.4m) of it!

And remember, the Barnes Wallace (more of him later) designed Tallboy was not the biggie. He also designed the 10-ton (22,000 lb) Grand Slam! They don’t have one of those unfortunately, but even the Tallboy makes the 400-kiloton thermonuclear bomb standing next to it, look puny!

Other buildings house the “NAAFI” (the museum restaurant with very good food!); a museum shop (bought some books here!); a nissen hut with recreations of a WW2 Airman’s Billet, a Motor Transport Workshop and typical Royal Observer Corp posts. There’s a recreation of the French Officers Mess; a Chapel; the 609 Squadron room; ‘Gasbags to Super-Zeppelins’, an interesting, Lottery Heritage funded exhibition about airships; and an evocative exhibition on the WW2 activities of Bomber Command with a cinema showing short films about Bomber Command on rotation.

The Control Tower is a Grade 2 listed heritage building that has been lovingly restored and kitted out in its authentic 1940s state. Inside it has the Meteorological Office, Air Traffic Control (ATC) telephone exchange, teleprinter room, and duty staff restrooms on the ground floor. (Also on the ground floor is the museum’s Radio Room with some antique but operational radios.) Upstairs, you can find the control room itself, the senior ATC officer’s office, and the Movement & Monitoring room.

Operations Board in the Control Room

The control room, despite being populated by some fairly androgynous mannikins(!), is pictured on a significant day in the airfield’s history – 9 March 1943 when 7 Halifax bombers from 77 Squadron were out on a mission to Munich from which only 5 returned. The raid details are on the Operations Board.

There are two buildings with exhibitions that are unexpected.

Building No. 3 houses the Air Gunners display room, dedicated to the 20,000 air gunners who were killed in WW2, and believed to be the only such exhibition in the world. It has a collection of (alarmingly small) turrets and other weapons, and reminds us that many gunners had other jobs too – gunner/engineer, gunner/radio operator, etc. It also has an air gunner simulator, which when I was there kept an extended family happy for ages as each tried to out-gun the others.

Some gunners had another role

The Pioneers of Aviation exhibition in Building No. 20, created with a grant from the Heritage Lottery fund, highlights the work of Yorkshiremen starting with Sir George Cayley the ‘Father of Aeronautics. It covers people like aviator Amy Johnson and manufacturer Robert Blackburn, and inventor, Barnes Wallace.

What really fascinated me was not just the replica ‘bouncing bomb’, nor the photographs of the Top Secret mission orders for the 617 Squadron raid on the dams, nor the recreation of his office with models of his inventions to come, but rather, the creaky wooden frame with elastic ropes – the actual catapult device he used for skimming test models of his ‘bouncing bomb’ along the research water tank at the National Physics Laboratory, Teddington.

This is the real thing! Barnes Wallace’s test catapult

Have you been to the Yorkshire Air Museum? What did you think? See my rating below.

Declaration: I always reserve the right to say what I think on this blog, whether hosted or not, but in this case a declaration is not needed. I paid for everything on this visit including entry to the museum.

Events:
There is a small programme of events during the year – commemorations & memorials (Esp Nov 5th), family days and “Thunder days” when they fire up the engines on some of their aircraft.

Sponsorships *: The museum has a ‘Sponsor a Plane programme. You can sponsor any particular plane for £50, a group of aircraft for £100, and the Halifax Mk3 for £165.

Getting there:
Yorkshire Air Museum, Elvington, York, YO41 4AU

The museum is located about three miles to the southeast of York, just off the A64 bypass.

‘Masters of the Air’ Updates