What’s the difference between one tank museum and another?

Well, clearly it’s not the tanks they have in common – everyone has a German Hetzer and an American Sherman – it’s the oddities, and that’s the reason for travelling out into the Swedish countryside to visit Arsenalen, because let’s face it, the Swedes do things differently. 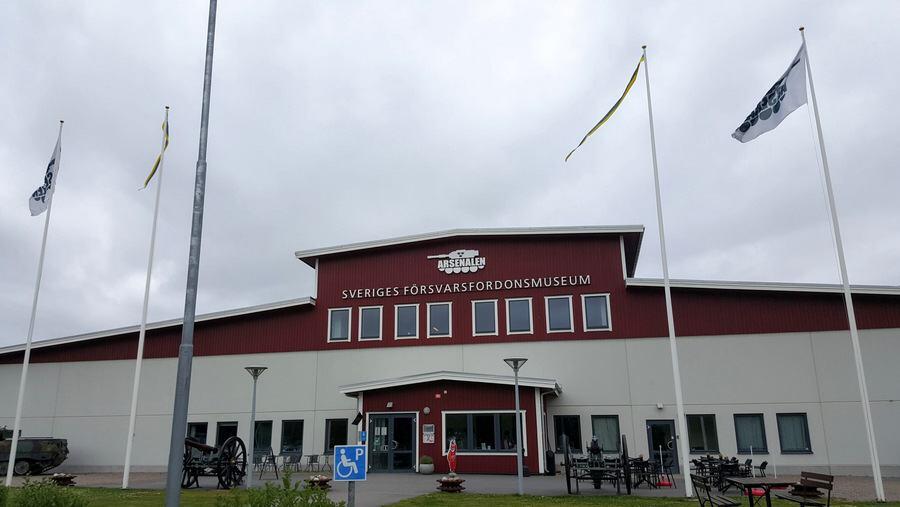 With innovative companies like Saab, Bofors, Volvo and Scania, they’ve come at engineering & design from a different angle to everybody else. Just look at their aircraft: the Saab Draken, Gripen, etc!

So when it comes to military vehicles, their thinking is also unorthodox.

Take the Stridsvagn (tank) FM31. In 1931 they built one of these as a concept development vehicle to maximise speed and mobility. It has conventional tracks giving it good cross-country mobility at speeds up to 35 kph, but then a quick 6 second transition onto its wheels meant it could travel on roads, for rapid re-deployment, at 75kph. By the way, the gun and mantlet are not quite as lethal as they look – they were made out of wood!

Or, around the same time (1932), their Pansarbil (armoured car) FM29. It has four wheel drive, and, wait for it, four wheel steering from two driving positions, so that it could travel equally fast in both directions – this is a concept that will re-appear! The FM29 turned out to be underpowered and too heavy, so once again, only one was built – that’s two totally unique vehicles at Arsenalen and we haven’t even got out of the first section!

Actually, it’s three. In 1928 the Swedes bought a French Renault NC27 for evaluation and redesignated it the Stridsvagn FM28, which is how Arsenalen has the world’s only example of this iconic French tank.

Actually, it’s almost four, in the opening section of the museum! The Finns captured a Soviet T-37 ATU amphibious light tank in 1939 and gave it to the Swedish Volunteer brigade operating in Finland. It is now one of only two examples in the world, which is odd, given that between 1933-1936 the Russians made around 1,200 of them (based on a British Vickers-Carden-Lloyd design).

Another Swedish innovation came from Bofors in 1931. The plan was to make use of traditional trucks and turn them into armoured cars, so each Pansarbil M31 was unique, depending on its truck base. Apparently reversing was tricky. Somebody sat at the back and gave the driver directions via a wire system that operated a direction sign in front of him!

The Swedes didn’t just build their own military vehicles, at various stages they also manufactured German, French, Czech or English designs under license or by collaboration, or in some cases just bought them.

In 1936 the German company Vidal & Sohn sold several hundred of their slightly weird Geländewagen 1200 6-wheel cars to the Swedish armed forces who renamed it the Terrängbill (Cross-country) M39 – Tempo Vidal and used it for reconnaissance and for towing a 37mm anti tank gun. How was such a small car able to do that? It was a very light tubular design powered by two engines, one at each end! It also had selectable four-wheel steering, which could be a little intense and caused many rollover accidents. The middle two wheels were actually spares but gave the car extra support over particularly rough terrain.

That 4-wheel steering obsession with the Swedes appears again in their Pansarbil M40-Lynx scout car armed with a Bofors 20mm cannon – a real pull-me-push-you armoured car with two drivers (crew of 6) at steering positions front & back! It could reach its max speed of 75kph in either direction!

Not every Swedish design was/is quirky (well, apart from the amazing S tank – more later!). Some designs like the 1938 Stridsvagn M38 light tank, the 1944-47 Stormartillerivagn M43 self-propelled gun, the 1943 Stridsvagn M42 heavy tank, and the 1975 Ifanterikanonvagn 91 tank destroyer, were both traditional and successful tanks.

The museum doesn’t just house Swedish tanks or other nations’ tanks used by the Swedish Army, there are also a number of international exhibits arranged chronologically as you make your way through the museum, from WW1, WW2, the Cold War and up to the present day. So there are well-known tanks like the Panzer I, the Hetzer, the Sherman M4 (Firefly), a Marder II SPG, a Russian T-34, Cold War classics like the British Centurion & Chieftain Mk 10, and more contemporary vehicles like the German Leopard 2 or the American Humvee.

As the museum’s director, Stefan Karlsson, told me, they think very carefully about every vehicle that they put on display. It can’t be just because it’s rare, or famous – there has to be something special about it!

And they also think carefully about how they display their exhibits. For example the woodland diorama repair area, where recovery vehicles are towing broken vehicles back to the mobile workshops to get fixed up, or the cutaway Soviet T-55 tank so you can see the cramped interior, or the Checkpoint Charlie crossing with the East German army “Trabi”.

In an effort to broaden the appeal of the museum – not every visiting family member is a tank enthusiast – they do have a children’s play area, and an impressive collection of tin soldiers and other characters in illuminated display cases in a mini museum under the mezzanine floor where they also stage temporary exhibitions. When I was there there was an exhibition of historic Swedish regimental uniforms and artifacts.

Naturally there is a museum shop – not the best stocked I’ve seen and not many books etc for international visitors – and a cafe.

And, of course, like all good tank museums, they have a outdoor display area where they can drive their tanks around and show them off… which is what Stefan was doing the day I visited. A team from the Paris office of Wargaming.net (World of Tanks, World of Warships) were there to film his S tank, which is yet another famous example of Swedish design eccentricity. The more formally known, Stridsvagn 103, was Sweden’s main battle tank during the Cold War (operational from 1967 to 1997). What makes it unique is that it has no turret. The 105mm auto-loading gun is fixed into the low-silhouette body of the tank and aimed (by the commander or driver) like a fixed-turret tank destroyer, by moving the tracks. The elevation/ depression range of 22° (very respectable) is achieved with a unique hydro-pneumatic suspension system that tilts the front & back of the tank up & down. Very cool and Swedishly eccentric!

Declaration: I always reserve the right to say what I think on this blog, whether hosted or not, but in this case a declaration is not needed. I paid for everything on this visit including entry to the museum.

Events:
There is a small programme of events during the year when they fire up some of their exhibits and show them off. Check the diary on the website.

Getting there:
Arsenalen 645 91 Strängnäs, Sweden

Arsenalen is just 10 minutes drive from Strangnas, west of Stockholm. If you are driving it’s easy because the museum is right next to the E20 motorway.

If you are not driving, the simple way to get there is by train from Stockholm Central Station. Swedish Rail (www.SJ.se) run infrequent regional trains (Train No.946 Very comfortable double deck) out there, which you can pre-book. The journey takes about 40 mins and a return ticket costs 126SEK (£11.25). When you book online, you can print out your ticket. That sheet of A4 is your ticket, all you need to do is show it to the ticket inspector on the train. He may ask for photo ID (passport), but they didn’t bother for me.

Then you want to get a taxi out there, because the buses (Routes 820 or 220) are so infrequent. There appears to be only one taxi company, Strängnäs Sverigetaxi. (Tel: 0152-18600, www.taxistrangnas.se) and my experience with them was not good; they took 45 minutes to show up when I phoned them from Strangnas train station, and the firm arrangement I made with the driver for a return journey was never booked. I was lucky I phoned when I did because I barely caught the return train. So, book in advance and get a firm commitment from them to meet you off the train, and to collect you in good time to get back to the station. The taxi fare is around 195 kronor (£17) each way and, like everywhere in Sweden, they take credit cards.

Tanks with that Swedish touch! This is so worth a visit, even if it is not a huge museum and it is a bit out in the 'sticks' making it a bit expensive. There are some unique and quirky exhibits here, in a friendly and welcoming setting. (See 'About' for review criteria explanation)
EXHIBITS 95
DISPLAY 80
TECH 86
VALUE 75
TweetShareShare+

Wind-powered beach animals at the Kunstmuseum in The Hague

Norfolk and Western Railway archives have a new home