Armémuseum , the Swedish Army Museum, is a traditional capital city style museum in an impressive historic building in the centre of Stockholm, but although there’s lots of interesting exhibits & displays, I found it a little disappointing.

It’s a shame, because they really have gone to some effort to give the museum broad appeal. I mean, what would you expect of an army museum? Perhaps just a range of uniforms, weapons, equipment and documents from early civilisations to contemporary times?

Well they have that, but they’ve tried to set it within the wider context of mankind’s use and experience of warfare, and then Sweden’s own experience. To that end there are a number of exhibits covering the ‘spoils of war’, the arms race (from a jawbone club to assault rifles) and the lifestyles of peasants and nobility, common soldiers and generals throughout the ages. 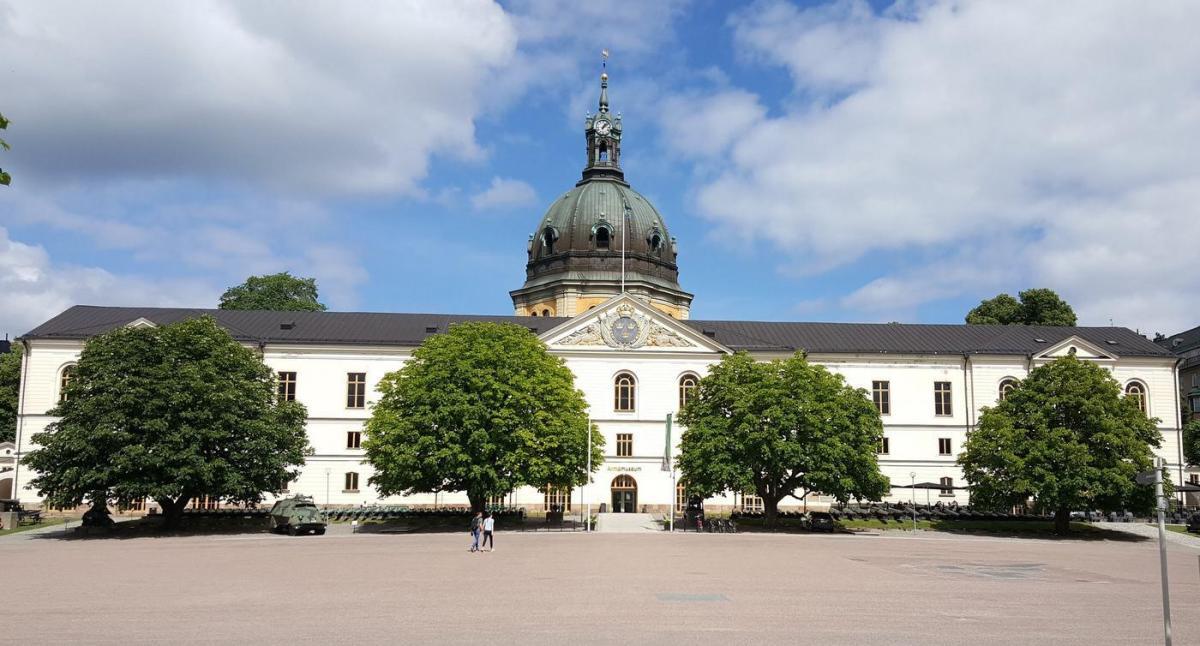 The museum is set on three floors. The idea is that you start on the top floor, which covers the 16th – 19th centuries, and work your way down. The second floor deals with the 20th century. The ground floor is used almost entirely for temporary exhibitions and I can’t say there was anything worth seeing there when I visited – the ‘Knitting Peace’ installation (lots of Swedish knitwear & furnishings… and draped over cannons and other military items around the area) and the ‘Power and the Story’ installation (if there were no historic archives what objects would we use to tell the story?), were way too conceptually ‘precious’ for me.

The expansion and contraction of Sweden during its military campaigns in the middle ages and later centuries are mostly covered on the top floor with plenty of dramatic dioramas with soldiers fighting in the woods, charging on horseback or freezing to death in the winter snows.

Moving into the 19th (and 20th century on the second floor) there are some interesting collections of medical corps equipment, especially surgical tools and supplies, all fastidiously organised into packs and boxes with every item labelled – the Swedes were very organised when it came to medical supplies – and all individually itemised and explained on digital touch screens for visitors.

A gallery on the upper floor

Ornate Ottoman tent from the siege of Vienna 1683

Collection of banners and trophies, and…

… a touchscreen display to identify them…

…such as this one

Soldiers fighting in the woods during the Finnish War 1809

Probably the most interesting part of the museum is on the second floor where Sweden’s role as a neutral country during the first and second world wars, is covered.

In particular, the WW2 period yields some interesting and unexpected exhibits, documents and photographs.

For example the Siemens & Halske T52C German cipher machine and teleprinter, designed circa 1930. Everyone is familiar with the Enigma machine used by German forces ‘in the field’ (the museum has one of those too), but there were other cipher machines that were less portable and better suited to handling traffic sent through fixed landlines. During WW2 the Germans demanded access to the Swedish telephone network so they could connect with their forces in Norway and through any other international connections the Swedes had. They used this machine, which could be set to one trillion combinations, to encrypt their messages. Unfortunately the Swedish mathematician, Arne Beurling, armed with pencil & paper, cracked the code in just 14 days, enabling the Swedes to listen in on everything!

There are some very interesting photographs documenting the war years in Sweden, including one striking image taken on the Swedish-Norwegian border with a Swedish border guards and German soldiers posing for the camera. And to give some idea of the hardships that came with neutrality, domestic items such as ration cards and artificial coffee.

Moving into more recent times, the museum concludes with modern weapon systems like the army’s excellent articulated, tracked all-terrain vehicle, the Bandvagn 206 (thousands sold worldwide!) and an Ugglan (owl) drone. There is also a collection of gun cases featuring some well-known and some rare firearms – pistols, sub-machine guns, rifles, assault guns, and so on.

The Army Museum, which used to be known as the Artillery Museum, has been on this site since the middle of the 17th century. It has undergone several refurbishments over the years. It is not a huge museum, but it does have some unusual and rare items to enjoy, such as the ornate Ottoman tent captured after the siege of Vienna in 1683. Unfortunately it is one of those ‘dark cave’ museums (why do they still do that??) where everything is in focused low lighting to dramatically highlight the exhibits… but that just means you will spend a lot of time peering at things and trying to read the signage. Also it means any photos you take (no flash allowed) end up grainy. It is understandable when particularly old exhibits need to be protected from deteriorating under bright light, but here it is more the norm than the exception.

Getting there:
Riddargatan 13, Stockholm, Sweden.

Couldn’t be easier. It’s in the centre of town, a ten minute walk from Kungstadgarden. You can visit on your way to the Vasa & Abba museums! The nearest metro station is Östermalmstorg. You can also take the number 7 Spårväg City tram or buses 69, 52, 76 or 62 heading for Nybroplan.

Tours:
You can pre-book private tours, but during the summer months they run a free daily tour in English. It’s usually around lunchtime. Check first.

Stuff:
They don’t let you take backpacks or large bags into the museum. You have to dump them in a locker.

Good, not great Definitely worth a visit since it's right in the centre of town and free. Signage is very good in Swedish & English, and there are some standout interesting exhibits, but the lighting is too gloomy and the bottom floor is a waste of space.
EXHIBITS 68
DISPLAY 56
TECH 75
VALUE 86
TweetShareShare+

Architecture Prize for the Freedom Museum in Groesbeek, Holland

Museum of Illusions to open in Washington DC